You are always near a brewery...

Although it is an ancient craft, brewing is still an actively pursued occupation in dozens of small and large breweries all over Flemish Brabant. You are always near a brewery. So why not go and explore? Just a stone’s throw away from the Abbey of Vlierbeek and the Provincial Domain Kessel-Lo, Marc Andries brews his beers.

He graduated from the Vrije Universiteit Brussel (VUB) with an engineering degree in chemical and agricultural industries. With this knowledge, he would later have a very varied career.

First, he worked for Meura, the largest producer of material for the brewing industry, especially in Belgium. Halfway through the nineties, Marc moved to Achouffe, where he observed production at the Brasserie d'Achouffe. Simultaneously, he was part of the relaunch of the Brasserie Piron in Aubel in 1993, in which the Achouffe brewery took a majority stake in 1996. There, he experimented further with the continuous fermentation process.

In 1999, Marc was not keen on moving to far away Achouffe, so Marc went to work in the brewery Haacht in Boortmeerbeek, where at that time they were looking for someone to lead the existing bottling plant and to launch a new bottling plant.

Through his experiences in Achouffe and Haacht, Marc now had a taste for start-up processes of production. So when the new bottling plant in Haacht was installed, Marc left the brewery to work for a company in Tienen. There, he was responsible for booting the production of the fabrication of solar cells. He worked there for four years and afterwards moved on to another manufacturer of solar cells in the Netherlands. 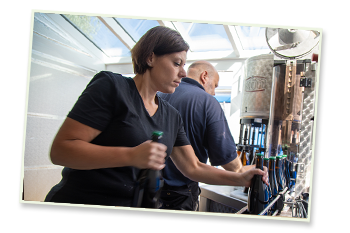 In 2008, a long-dormant project suddenly got momentum: starting up a brewery. On March 10 of that year, Brewery De Vlier BVBA was born.

De Vlier started in an empty building in the centre of the Leuven district Kessel-Lo, where a cafe (Bieduif'ke) used to be located. The choice of a name for the new brewery stemmed from the name of the region Vlierbeek.

In April the decision was taken to buy new brewing equipment from Pierre Rajotte, a Canadian supplier of small brewery installations of good quality at affordable prices and author of the book “Belgian Ales”. The brewing kettles and tanks were delivered and installed in early June. In the same month, brewing trials were started. July 2008 saw the first brewing of beer on a large scale. In September 2008, the beer was commercialized. Currently it is sold in various cafes, beverage wholesalers and local stores. 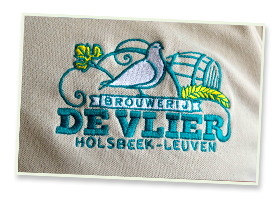 Marc quickly realized that Kessel-Lo was not the right location, logistically speaking. Part of a warehouse in Winksele was rented to continue production, but eventually the brewery found a better home in Holsbeek, near Kessel-Lo. A detached house with a large basement was transformed into a brewery with a tasting room. In the garden, a double garage was build to serve as storage space.

In Holsbeek, the range of beers was increased to seven, three of which are seasonal beers. To manage the increase, two fermentation tanks – which can hold 1000 litres each – were purchased.